We caught Ed Kuepper (The Saints, Laughing Clowns) at the Northcote Social Club last night. He was joined by drummer Jeffrey Wegener (Laughing Clowns) and newly acquired bass player Peter Oxley (The Sunnyboys) for two sets covering his career and the odd cover. 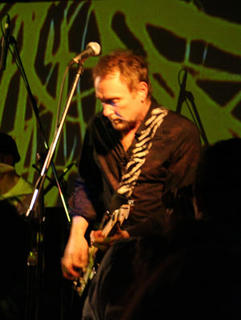 I'm unacquainted with most of Ed Kuepper's work although I did listen to Honey Steels Gold quite a bit and recognised a couple of his better known tracks. I did enjoy the long stretched out arrangements of most of the songs. He seems very comfortable playing his material. I was surprised to see that Peter Oxley had only played live twice in the last decade. The three of them looked like they had been doing it for some time. Darren, Morgan and Andrew all appeared to know and enjoy most of the set. Clarence (visiting from Malaysia) also joined us and enjoyed a night out even if the music wasn't quite to his liking. 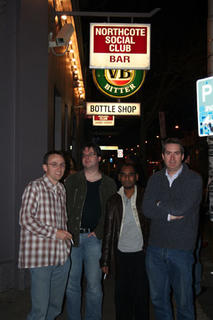 I also took the opportunity to try out some low light photography. The results were a little blurry and don't hold up to Andrew's photos from the previous week. At the least it was a chance to see what it's like photographing live music and I felt pretty comfortable. I'll keep at it.