I caught a train to Lumpini Park yesterday and spent the afternoon wandering around and sitting by the lake. Lumpini Park is known for it's '20 ring circus' of aerobics classes, fencing and other activities but I guess I was there at the wrong time because I just saw a few old white guys running around the track. Regardless, it was cool and quite and a nice respite from the city. 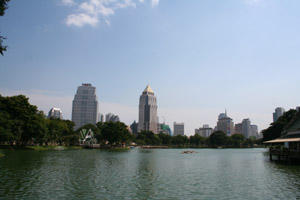 Lumpini Park.
I met Chris after work and we hit Lumpini Stadium for Tuesday Night Muay Thai (Kick Boxing). We bought discount tickets from one of the shiny jacketed ladies out the front (unlike this nervous fellow), grabbed a couple of beers and took our ringside seats. The only thing between us and the fight was a couple of rows of Press seating that appeared to be used by bookmakers rather than press members. 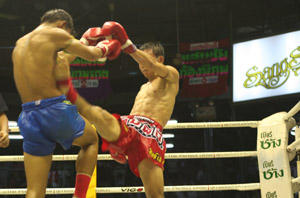 Muay Thai Match.
We met a nice English couple outside buying tickets so they sat with us and we all tried to work out the scoring system and rules for the boxing, and the complex frenzy of betting going on behind us. The first match was a couple of kids (not much more than 14 year olds) and was pretty light on. The second match was the same. We then realised that these were preliminary fights. The real fighters looked much more unpleasant to deal with. 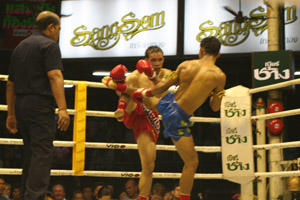 Muay Thai Match.
The fighting ranged from pretty tame to quite ferocious depending on the stakes. The Main Event was particularly aggressive. The crowd in the stands were right into it. Wildly waving hands signally bets in between rounds. There was a demonstration round of traditional Muay Thai in the middle that included a flying knee that would have been at home as the finale in any fighting movie. The whole thing was sweaty and smoky and loud, and it smelled of Decorub. It was great.

Traditional Muay Thai with Rope Gloves.
We went back to the champ's changing room after the main event, shook his hand and got a photo each. We finished the night with some Khao Pat Gai (Fried Rice with Chicken - and a couple more new Thai words for me) at a stand at the local market and then a taxi home. 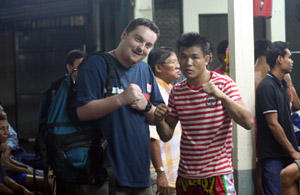 Me with the Champ (I need to work on my Boxing Stance).