Kuala Lumpur was still pretty hazed in on Friday. A 'state of emergency' was declared in a few of the other Malaysian states and there was talk of the same in KL if things worsened. I think schools and government offices were given the day off. Surprisingly it didn't play havoc with my asthma at all. 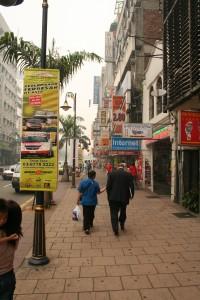 The Streets of Kuala Lumpur
I spent the day wandering the streets and taking photos. Kylie and Natalie arrived back from China so we caught met up at the ExxonMobil building and said hello to a few old colleagues. People were in various states of understanding whether I still worked there (I don't) and why I was wearing shorts and no socks while on a business trip (I'm not). I guess I was just in the wrong place at the wrong time. 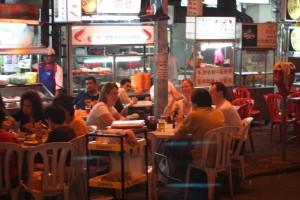 Dinner at Chicken-Fish
I met up with Kylie, Natalie, Lau and Andrew for dinner at a street hawker, infamously known as 'Chicken-Fish' as they serve a type of fish that either looks or tastes like chicken (depending who you ask). I thought there was a little of both. The stand is run by Mrs. Chicken-Fish, a grumpy middle aged lady - apparently the fish isn't as good when she's not there. 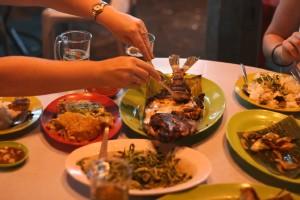 The infamous Chicken-Fish
We ate Chicken-Fish and a bunch of other dishes and listened to tales of Kylie & Natalie's trip to China.