Yesterday we zipped over to a local independent record store called Straits Records (43 Haji Lane, Singapore). They have quite a small range, but they stock a good selection of stuff that I wouldn't expect to find elsewhere here.

I picked up (local groups) shamejoannshame's Gossips EP (on CDR), Plainsunset's Lovesongsfortheemotionallywounded and Return to Fall's "A sense of the bitter A sense of the sweet". I was lucky with the shamejoannshame CD as they thought they'd sold out. The guy wandered out as I was taking a photo to let me know he'd found one last one. I had hoped to pick up something by local post-rock act "I am David Sparks" but they are apparently still recording. 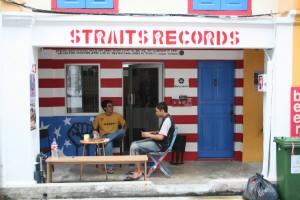 I had a quick chat with the guy at the counter about local music and the (very good) 65daysofstatic CD they were playing and then took a couple of snaps of the storefront. He told me that shamejoannshame and I am David Sparks are playing together on the 17th, but unfortunately I'll be gone.

I've only given the CDs a cursory listen so I can't comment on them much. I enjoyed the shamejoannshame but the other two were a little too 'straight up' rock for my tastes.

I'd recommend a walk up Haji Lane. There's a couple of metal stores there too. Straits Records doesn't open until 1pm and they don't appear to have a phone.