Darren, Michael and I went to the Ding Dong Lounge (previously the International Bar, to my surprise) to bathe in newly found favourites Laura. Actually I bathed and the others drank. I also took the opportunity to try some more photography with a newly acquired 50mm f1.8 lens. 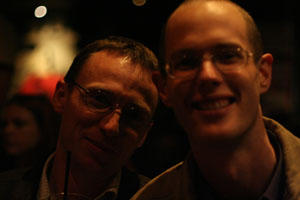 Despite the closeness in the photo above and my accidental loving focus of Darren, there is no romance going on (that I am aware of). I'm just not very good at framing without a zoom lens and I made them squeeze in. The drinking straw in the photo does not further this conjecture. 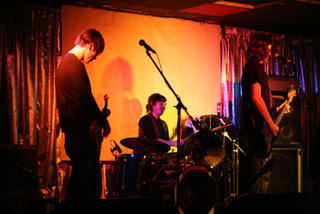 Sydney's Null Set were interesting to listen to. There were a couple of 'tuning malfunctions' but the performance itself was pretty good. Kate Wilson (drums) looks like someone's little sister and plays furiously. 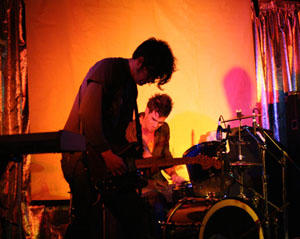 I thought Darren was a fan of International Karate, but it turns out I was thinking of (fellow video game named) Art of Fighting. IK sit on the more pedestrian 'Explosions in the Sky' side of the post-rock genre. I enjoyed their set, but the other guys didn't have a kind word to say. My only criticism is that they didn't look very "into it". I did like bass player Mark Mascia's "ceiling gazing". 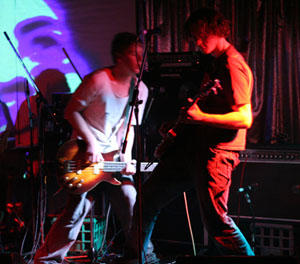 Unfortunately (for single-minded camera-holding me) Laura went for a darkened red-lit stage, so I struggled to photograph them within the limits of my camera setup. They played another intense and mesmeric set backed my some interesting projected visuals (Hebrew-like codes and other Pi-ish imagery). Their live performance is great so I hope they put out a live release of some type in the future. I've had the opportunity to see quite a few local instrumental acts lately and Laura definitely stand out. 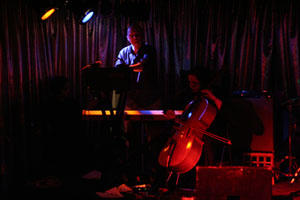 I'll put a bunch of photos up in my gallery once I've made some 'cropping' decisions.

Edit : Photos of the gig are here. Minimal cropping due to laziness.