Today we whacked on the loud shirts and baseball caps, looped the cameras around our necks and spoke to people very slowly and loudly (like they were 3) on our way to the number one tourist attraction here – Sentosa Island. Just kidding about everything but the cameras, although Sharni is speaking a bit loud due to her ear infection. 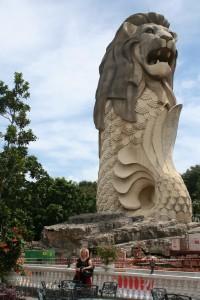 Wikipedia says that Sentosa is the closest Singapore has to Disneyland.

We hopped on the MRT to the Harbour Front and then a bus over the causeway to Sentosa. Half the island is a golf course with a couple of fancy hotels. The other half is a mostly ‘locally themed’ theme park. Buses transport people between the attractions around the island. It’s pretty reasonably priced (about SNG$50 would cover the main attractions). We started at the big brother to the previously blogged Merlion statue. I estimate this one is more than 100ft tall. We then wandered down to Siloso Beach where there were a variety of resort-like activities going on. It’s a nice beach but the horizon is covered with enormous container ships from Singapore’s harbour. We then wandered over to the aquarium and checked out the huge sea turtles and rays outside.

We hopped on an open tram and took a short drive around a few attractions. We stopped and took some photos of parrots at a bird show and then bought tickets for the Cinemania ride. An obnoxious tourist interrupted our ticket purchase and then ended up sitting next to me in the ride. I couldn’t work out what language he was making amusing exclamations in for the whole ride, but it doubled my enjoyment of it (seriously). The ride itself was a cinema with a dozen hydraulic 4 seat pods that moved in time with the rollercoaster visuals. It was a lot of fun.

Sentosa Island from the Cable Car.

We finished up with a (fairly bland) Magical Fountain show and then took the Cable Car back to the main island. The cable car was cool as well.