Today has been hot and surprisingly dry - a lot like a hot Melbourne day. I trekked East past all the Embassies to the Singapore Botanic Gardens. Island in the middle of Swan Lake.
I spent most of the day exploring the gardens and taking photos. I started at Swan Lake at the southern tip and worked my way north through waterfalls in the Ginger Garden to Symphony Lake where I snapped some large orange Carp (I'm guessing) that were being fed by some visitors. A turtle at the Ginger Gardens.
On the path I was stopped by a Buddhist monk who sprang ninja-like from the bushes. He bowed, handed me a prayer-card, lightened me of $10, put a bracelet on my wrist and posed for a quick photo. He pointed to the sky so I think the whole ordeal got me closer to God, but he also motioned to a previous $50 donation and indicated that this would have got me a little closer. Money Monk.
He showed me a photo of a Monastery that he's apparently building, but the card has a nice rendering of a red sports car on the back, so I'm not sure which I contributed to. I guess I got a bracelet... 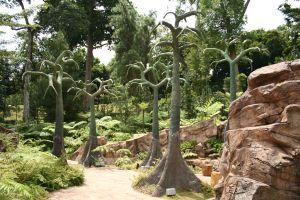 Proto-trees in the Evolution Garden.
Further north was the spiraling Evolution Garden showing the history of plantlife on Earth. It was a unique mix of Flintstone like rock structures and weird & wonderful plants. They even managed to have tadpole-like creatures and insects hanging around their 'beginning of Life' Stromatolites (yep, that was on the brochure).

I was swapping between three camera lenses all day and luckily happened to have the telephoto on while I was sitting on the bench at the end of the Evo Garden. A little lizard scampered up and clung to a nearby tree. I managed to get of a few shots without needing to move and scare him off. A slippery little fellow.
I continued north and tried my hand at some macro shots of flowers. I realised I have no idea how to capture plantlife apart from the the well-worn flower macro. Everything else looks dull and too busy. More research is required. Genus unknown (to me).
I finished the day off at the Eco Lake which contains both Ecologically and Economically important plants. Rubber trees were key to this region's early economy. I even saw where the first bunch were planted. A rare shot of the sunburnt author.
I almost finished the day with a great shot of a turtle but I got just a little too close. So much for being slow.