On Sunday we picked Suhana up from work and headed out 30 minutes to Batu Caves. The roads and signs here are unique and don't always seem to apply to each other. Even the locals seem to have some trouble. Driving here is quite different but I can see how it works when everyone follows the same 'rules'. 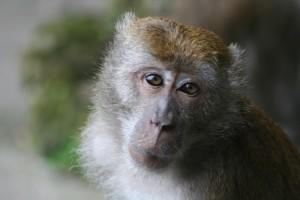 A Monkey at Batu Caves
Batu Caves is a Hindu temple located up some 276 steps in an enormous cave. It's inhabited by Hindu pilgrims seeking enlightenment, tourists seeking photos and a large number of wild monkeys seeking food. We marched up the steps and took a good number of monkey photos. The caves are remarkable. They look like something from Indiana Jones - especially with the flood lighting on the statues and pathways. 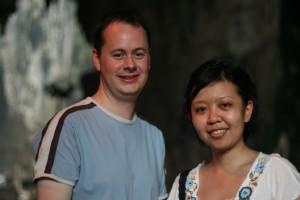 Andrew & Suhana at Batu Caves
The monkeys are quite shy considering they have food thrown to them by visitors. I did see one going though one tourist's plastic bag and helping himself to a banana. One the walk back down I glanced at a poor lady who'd only made it up the first 3 flights and looked like she'd been through hell. I gave her a quick smile of encouragement and wiped yet another litre of sweat from my forehead. I hope she made it. 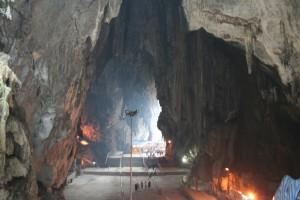 Inside Batu Caves
After Batu Caves we drove on another hour to the Genting Highlands. Genting is a holiday resort built on top of a moutain with theme parks and a casino. The view from the mountain was limited due to cloud and smoke but there was still plenty to see. It's surprisingly cold due to the altitude (somewhere around 2000ft above sea level). I'd guess it's around 15 degrees C compared to KL where it's high 20's. 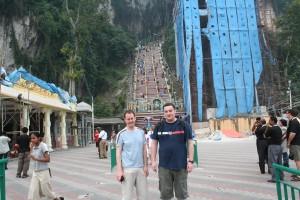 Andrew & I outside Batu Caves
We walked through the shops and inside theme park and then over a bridge that gave us a nice view of the outdoor park. There were a bunch of rides but I think we all agreed that it was a bit late in the day to start riding rollercoasters. We took a few photos and then Suhana took the reigns of Andrew's car for the descent back to KL. 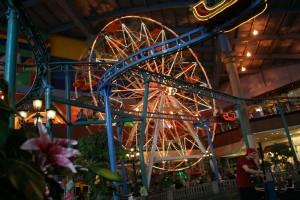 Inside Genting Highlands Resort
We collected Kevin (another ExxonMobil visitor from Houston) and enjoyed another feast at a restaurant called Hakka (apparently a region in China where this style of cooking originates from). We ate a variety of fish, chicken and beef. The chicken dish that I selected contained some very hot dried chilis (I had to pick them out). 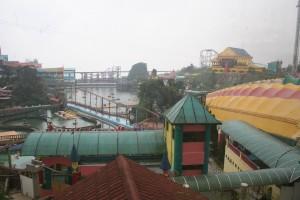 Genting Highland Park
Andrew, Lau and I finished up giggling like school girls at a few episodes of Family Guy before turning in for the night. 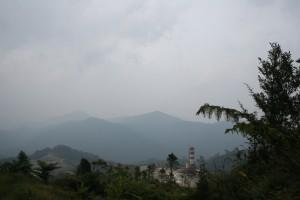 The 'View' from Genting Highlands