I was 'templed out' by Friday so I spent the day kicking about town in Siem Reap. It's a dusty but burgeoning town since Cambodia has opened it's door to international visitors again. The French influence is apparent in the architecture and the delicious bread that accompanies meals. Glamorous hotels are springing up everywhere but fortunately most are a little outside town. 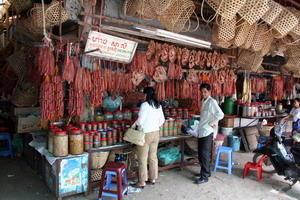 Marketing for meat in Siem Reap.
I looked through a couple of markets and picked up some Kramas (a versatile checked scarf that the Khmer people use for everything from a towel to a headdress to a sarong. Internet cafes are scattered throughout the streets but access was pretty unreliable and functionality was limited. I took a few shots of some local landmarks and popped into The Dead Fish to escape the heat and enjoy a quick drink. I'd hoped to have a Lazy Fish (Coke, Rum and Red Bull) but we had some language troubles so I ended up having a Sprite. 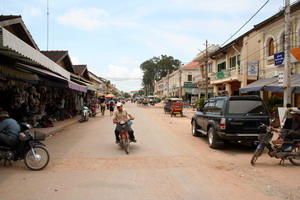 Dusty streets of Siem Reap.
The Dead Fish is a little like a stilted village shrunk into a bar. Ladders link levels in every direction. It's a bit like something from Mad Max 3. Hand painted signs proclaim that they "Use no Dog, Cat or Rat" and the menu explains that the service might differ from what you're used to and to be patient. 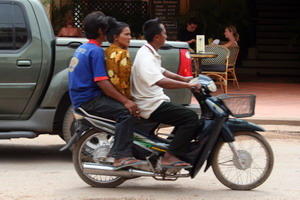 3 on a bike - No chance for the title.
I've been having a little competition for the most folks on a motorbike while I've been away. Siem Reap now holds the potentially unbeatable record of 5 people on one bike. I also saw a chubby white ex-pat on the back of a bike clinging onto a TV. 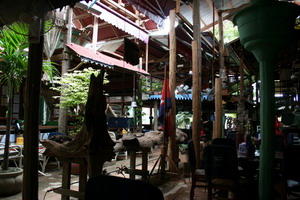 Inside The Dead Fish.
I took a mid afternoon flight back to Bangkok and funnily enough it felt very much like going home. I felt like an old hat going through the customs procedures and I even managed to help a few folks in the taxi queue with directions and some suggestions for sight-seeing. My suggestion to visit the kickboxing and "just eat on the street" didn't get much of a response from the cheery English couple but they were happy to discuss the cricket. Cricket seems to be the new favourite sport in England. Cheeky buggers. I even remembered enough Thai to tell the taxi driver where I was going. It was a marked difference from when I first arrived a couple of weeks ago. 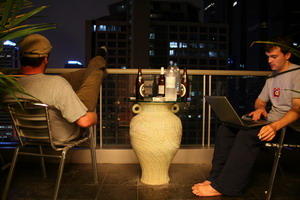 Relaxing back in the 'kok.