On Sunday we woke mid-morning, a little worse for wear (I'm attributing that to the heat) and checked out. We jumped in the car and headed north in search of Hellfire Pass - the largest cutaway on the Death Railway and so called due to the ghostly shadows cast upon the rock by the POWs working by firelight.

Chris relaxing.
After an hour's drive through some beautiful moutainous countryside it became apparent that we might have been going the wrong way. We stopped at a couple of service stations and received various conflicting advice (basically arms pointed in both directions along the road). We decided to head back to Kanchanburi and seek further directions. We discovered we had failed to take a turn off in town but we were both pleased with the detour for some unplanned scenery. None of the travel books I read make much mention of the surrounding countryside, but it's really one of Kanchanburi's best assets. 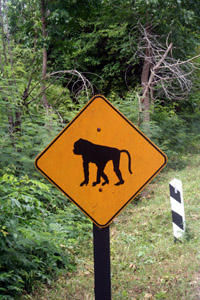 Monkeys Crossing.
We found the right road and made it to Hellfire Pass about an hour later. We took a walk through the really nicely laid out museum and then walked the track. The pass itself has quite an impact when you have some idea of it's history. The rail track itself is gone (I'm not sure why as it's metal and wouldn't have perished) but a few sleepers dot the path. We were lucky to have the place to ourselves. 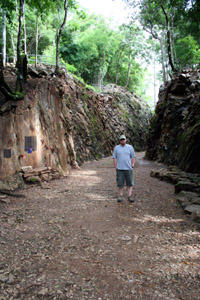 Hellfire Pass.
We headed back to Bangkok as the sun set. We joined a convey of at least 20 enormous tourist buses complete with police escort. We couldn't work out why they were receiving special treatment - they ran every red light with a motorcycle cop holding traffic in the other direction. The bus drivers communicated to each other by flashing their hazard lights and indicators. I think this might have been warning the others about when they might have to stop. My only theory is that all these bizarre components fit together to reduce traffic congestion. In any case it was more like watching a well oiled bank heist than a bunch of Thai holiday makers coming home. 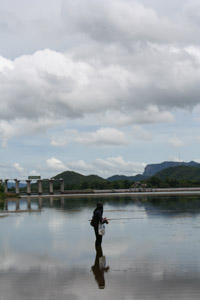 A fisherman on the River Kwai.
We managed to stumble onto the right road coming back into Bangkok and took the most direct route back to Chris' place.