On our first full day in Prague, we wandered down the river and across the wonderful old Charles Bridge which housed a nice little Jazz group busking and a serious amount of photographers and painters selling their wares. 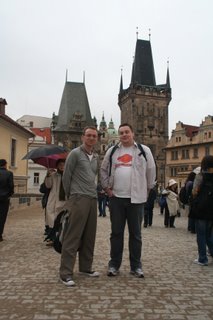 Darren & I on the Charles Bridge.

Our first stop was the church of St. Nicholas which was incredibly Baroque. I think it's probably the most amazing church I've seen to date. We climbed the bell tower to take in a view of the city and were greeted by a sheepish young fellow in a cape at the top who appeared to be spending his day at the top chatting with an old man. The interior is a cacophany of gold statues, ornate carvings and marble.

We then headed to the castle which seemed like an endless array of different buildings all linked up. We wandered through the large gardens and took in the amazing church in the middle. We noticed an older gentleman in a very cool hat (Swiss? German? certainly amusing) who we managed to sneak a photo with. It is presented here for the reader's pleasure. 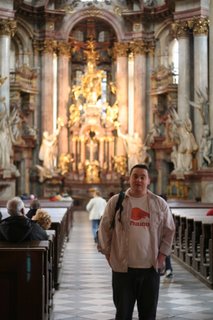 From there we decided it was time for something more recent and headed to the Franz Kafka museum which was a nice little display of documents and trippy audio / video installations. It presented his life and work in a nice digestable fashion. Outside we stumbled onto a statue I had read about previously. Two men who look like they are computer-generated pissing on a map of the Czech Republic. You can SMS words to a special number and they will swivel their hips to spell out the letters in a stream. 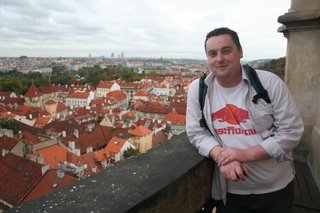 On our second morning we indulged in a breakfast at the hotel (underground in a converted wine cellar) and then visited the old town square and the new town square. The new one only being new in comparison with the old one. I can't remember when it was established, but it was a good while ago. We checked out the Astronomical Clock and the statue of King Wenceslas. 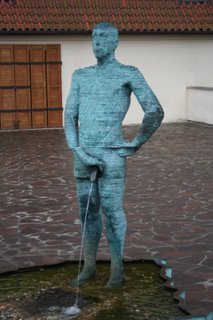 On the way home we visited an astoundingly large bookshop and I picked up a copy of Kafka's Metamorphisis (as is the fashion in these parts). I knocked over a fair chunk of it before dinner and was a little tripped out when we wandered out into the little cobbled streets and passed a bent-over old crone begging for some coins (and celebrating quite vocally when Darren indulged her) and a middle-aged women dress in a leotard looking like something from Xanadu. 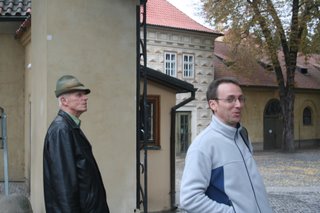 Darren being followed by a man in a silly hat.

We finished the night in a little hipster dive selling books and booze amongst the intellectual young Czechs playing cards and (probably not) discussing politics. Sadly I knocked my beer over Darren to quickly kill the romance of the situation. 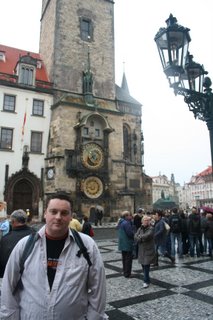 The Astronomical Clock in the Old Town Square.

And by romance I speak of the city, not of my travelling companion (who has refused on two occasions thus far to purchase me a rose over dinner. Thankfully). I finished the Kafka and a bunch of essays analysing it, and was satisfied. 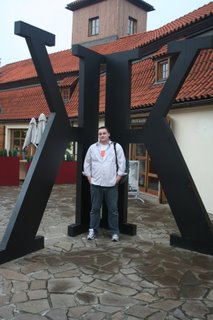 Prague seems like a great city from our short time here. They are certainly making the most of the tourist dollars, although I'm sure that things settle down quite a bit outside the main sights. The food is hardy and not very exotic (they do love their meat in this part of Europe) but good for us guys knocking through kilometre after kilometre each day.

Now I'm just tying to fill up some space between photos...Speaking of photos, apologies if these are blurry or dark. I can't see them very well on this old monitor. 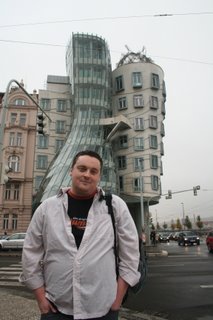