You Had Me At Hello

We both woke up a little worse for wear on Thursday. Matty was still nursing a flu/allergy/cold/malaria/dengue and I was dehydrated and sleepy (not sure why - might be the Indian Summer). We wandered outside around 9am to discover that nothing was really open and the touts were out in full swing. For a couple of hours we wandered the streets and were accosted by every scam in the Lonely Planet guide - cheap rides to markets (with a commision), directions to 'government' travel agents (with a commision) and creeps following us around for blocks. We decided this was too much and headed back to the hotel.

I almost expected to spend the day at the hotel, but I had a quick flash of brilliance and suggest a visit to the museum. Quiet, cool, peaceful.

We wandered around the exhibits of carvings and bowls and identified what we could with our limited understanding of Hinduism and Buddhism. My brain started to kick back in and I realised that although I don't place the same level of importance on the arts as some folks, it's almost the only thing that remains four thousand years later. There were some cool swords and stuff too. 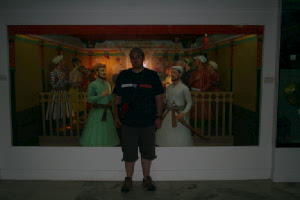 The (dark) Museum.
The Museum is quiet heavily guarded and requires a metal detector check and a frisking as you walk in. The same occurs on the way out, presumably to ensure you don't have Shiva 'Destroyer of Worlds' hidden under your shirt. These checkpoints are staffed by guards in military uniforms with machine guns.

Matty proceeded through the metal detector as I opened my camera bag for inspection. As he stepped out of the detector the guard motion for him to come over for a friskin and checked him over with one of those magic wands. Satisfied that Matty wasn't smuggling any artifacts he gave him a hug and said "You come back".

At the time this amused me somewhat, but the more I thought about it, the funnier it became. I re-imagined the scene with Matty coming up with a quick quip along the lines of "You had me at hello" or "You're the reason Cavement painted on walls". The whole thing was inappropriate and bizarre. I loved it.

We caught a confused taxi back to the hotel. Apparently there are three hotels with the same name in Delhi, but he just picked one and headed there. It wasn't the right one and after consulting the trusty compass I finally got him turned around (in between his pleas for us to visit markets). 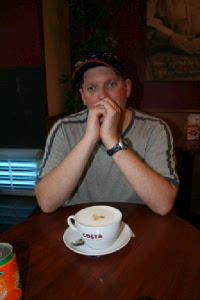 Matty & The Giant Latte.
Delhi was a whole new town when we got back. Everything was open and the streets were teaming with normal people who didn't want to follow us around. We stopped in a chemist and picked up a cocktail of drugs for Matty's flu and then picked up a few books from a vendor on the street. The streets are liberally scattered with book vendors selling all variety of novels for a few bucks each.

We had an afternoon meal at Ruby Tuesdays. Long ago we stopped the standard practice of three meals a day and now we just eat when we're hungry. Often it's one meal a day in the mid afternoon. Ruby Tuesdays is a franchise restaurant something like the Hard Rock Cafe. They played Deep Purple all afternoon. I don't mind Deep Purple but Child in Time isn't really afternoon cafe music. 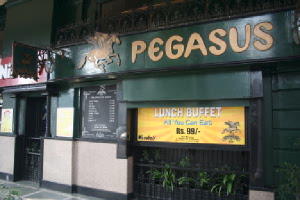 Pegasus Pub, Delhi.
We did a few more laps of the shops and finished the day with a few quiet beers at the bar next door.