The Old Buck, He Loves the Honey

We spent a nice boozey & blokey weekend in Cowes to celebrate Jamie being a buck, or the buck or his last night of freedom or something. I'm never really sure what the purpose of the Buck's Night is. Regardless it was a bunch of fun and I suspect I'm not the only one still feeling a little 'tired' today.

We played some Texas Hold'Em on Friday night. I'd dismissed poker as a dull way to dupe your buddies out of a few bucks while consuming beer, but after an evening at a private table at the casino and this session (after knowing how to play properly) I've warmed to it quite a bit. There's quite a bit to it and it's really quite a well balanced game. 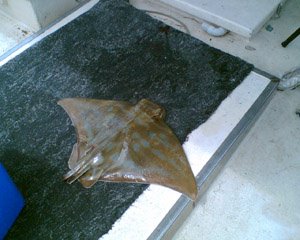 Eagle Ray.
We braved the morning light and took a charter out (onto Western Port Bay?) on Saturday morning. Unfortunately I didn't catch a thing, but I also didn't throw anything back (or up) into the sea either. Noel managed a Hemmingwayesque performance in a battle against the 'Eagle Ray' shown above and we took it home with plans to throw it on the barbecue later that evening. I think fear (and maybe a little seediness) prevented us from fulfilling that dream. I can easily see how a battle like that could give someone the fishing bug. The ship's captain commented that it was a 'once a year' catch. I'm not sure if I can call a charter boat guy 'ships captain' but he seemed sea-worthy.

The boys played 9 holes in the afternoon while I enjoyed a cheeky 30 minutes in the cot and an age-lessening shower. We finished the night with a spectacular barbecue (sans any of the day's catch) and another round of Hold 'Em.

I believe all eye brows were present and accounted for upon our return to Melbourne.