I caught the Dave Matthews Band at the Palais in St. Kilda on Monday night (21st March). My seat was way up in the Dress Circle, but I still had a great view of the band. The Palais is a really well laid out venue. It was the best seat I've ever had at a concert.

The setlist was pretty close to what I would have picked and included a great jam at the end of Two Step. I was suprised to see so many people grooving along, but I guess it's naive to think they don't have an audience here. I'm sorry I'm not heading up to Byron Bay for the East Coast Blues & Roots Festival. There's a bunch of good acts playing. Maybe next year... 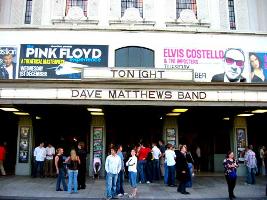 Here's a shot someone took outside the venue. I didn't take a camera and I haven't seen any shots from inside. I found a recording of the night before, so hopefully someone will post this night as well. I hope the tour is successful for them so they come down again. They looked like they had a good time.

Update : The recording has been made available here on Dreaming Tree.

I woke up in the Louvre this morning covered in peanut-butter and rice. Initially I thought I'd been robbed, but I found my belongings hanging in my backpack on the arm of the Venus De Milo. A french guard with a waxed moustache discovered me jumping to reach my backpack and chased me through the Da Vinci exhibit. Hilarity ensued.

I caught a filthy French taxi from the Louvre to my next stop - the castle of King Louis 13th. The King was out but I did manage to meet his lovely wife and hilarity ensued again. It wasn't until the tower bell was sounded and I had to make my escape out the window, that we parted company. Swimming in a moat isn't much fun. It's worst with your pants around your ankles and a baby crocodile chasing you.

I settled in for the night at a charming Bed & Breakfast and spent the evening in their palor surrounded by characters from an Agatha Christie mystery. Despite my efforts to drum up a posse and go after the wiley suspcious-looking butler, the other guests seemed content to sit, drink their cognac and chit-chat. To them I say "Sac re bleu" or whatever that saying is.